10 things to know about Gulp 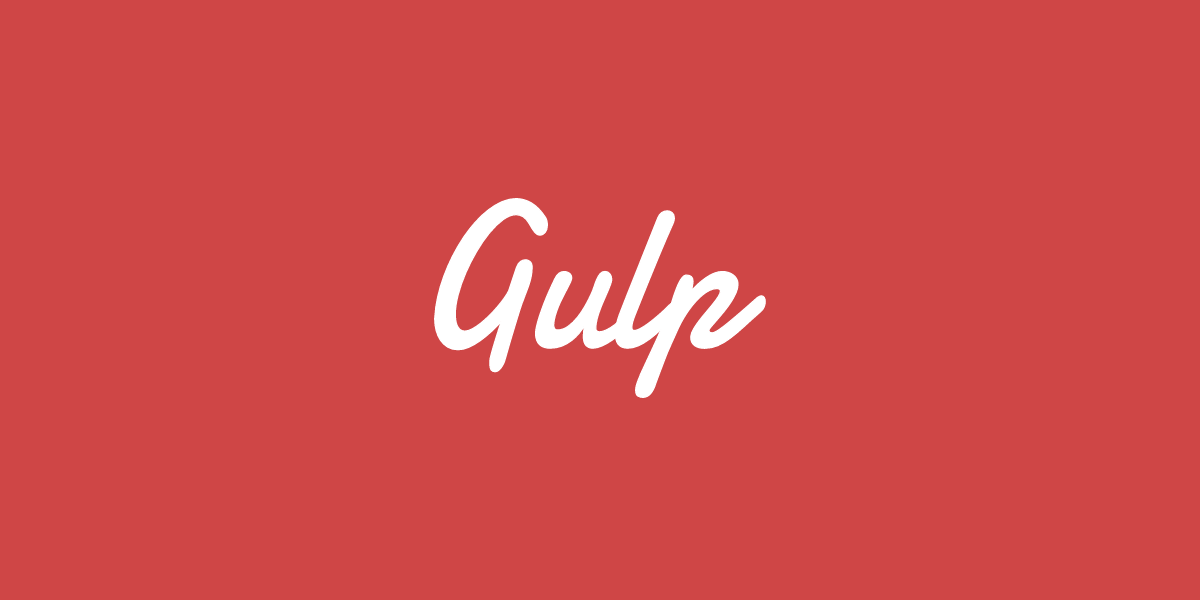 I love Gulp. It’s great in so many ways and for so many purposes. I’ve been putting off writing a post on it forever. There’s just too much to write about; I could write a book on it. So instead, I’m going to give a quick introduction and share a few tips.

Never heard of Gulp? It’s a build system or task runner like Maven, Ant, Grunt, and so on, except much much better. A few other key points:

I’m unlucky enough to have had experience with a host of build systems. My introduction to Gulp happened not long after I joined Teamwork when it was added to one project to begin with. I’ve latched onto it ever since. Now, Gulp is used in every project here for all sorts. I’ve even written and contributed to a lot of Gulp plugins / Gulp-friendly modules, beginning with gulp-bless. It’s really easy! Most Gulp plugins have one source file, less than a hundred lines long.

If you’d like to get up to speed with Gulp, make sure to read Gulp for Beginners by Zell Liew (and there’s more where that came from; his Automate Your Workflow book). Now, onto some tips.

Don’t get me wrong, there are some great plugins for the frontend (shout out to gulp-autoprefixer), but that’s not all the Gulp community has to offer. Pretty much anything you can think of; there’s a plugin for that. Some other uses we’ve found for Gulp include:

This is a simple but noteworthy one as it's not immediately obvious to everyone. You can save files to disk as many times as you'd like in a pipeline.

Despite how very very simple it is, gulp-load-plugins has to be my favourite Gulp plugin. Since "no one plugin should have all that power" Gulp plugins do one thing and one thing well, it's easy to end up with an uncomfortable amount of requires at the top of your gulpfile.

gulp-load-plugins makes all of your plugins (i.e. anything named gulp-* in your package.json) available to you to as properties of the single object. This has a great side-effect in that for a plugin to be usable at all, for anyone, it must be in your package.json. This removes the opportunity for someone to install a plugin (like npm install gulp-filter) forgetting the --save-dev flag (resulting in it working for them but not the next person on the team to pull their changes and npm install).

#4: Bend the stream to your will

You'll inevitably need a bit of flexibility in your tasks. For example, you might want to apply some manipulations exclusively to a subset of files within the stream;

gulp-filter accepts a single glob, an array of globs or a function which returns a Boolean (in case your step depends on properties of the files coming down the pipeline). As you can see above, you can use multiple filters per pipeline and even restore (or undo) the filter at any point.

gulp-if is similar but not the same. It accepts a "condition" in the form of a Boolean or a function which returns one (like gulp-filter). The other two parameters are reserved for the postive and (optional) negative outcomes.

This is particularly handy when paired with runtime flags and the gulp-util module. Using the following example, passing --mode production will result in the images being compressed before being copied to the output directory. This is useful for skipping over time-consuming steps.

What if this all goes wrong? Stick in a call to gulp-debug anywhere to see which files are coming down the stream then and there;

gulp-debug will then log varying levels of details about the files to the console depending on the options you pass to it.

One of the best things about Gulp is that you can use whichever modules you'd like in your tasks. There are a lot of "Gulp friendly" modules out there on npm which support streams and Gulp's vinyl files. Even if a module doesn't, you can do whatever you'd like within a task anyway, you just won't be able to easily pipe to/from it in a pipeline. Here are some of our favourite modules which aren't named gulp-*:

Gulp supports CoffeeScript since version 3.7. Once you npm install --save-dev coffee-script in the same directory as your gulpfile, you can have a gulpfile.coffee intead of a gulpfile.js and everything will work as normal.

Gulp logs whenever a task starts, when it finishes, and how long it took. Gulp is fast, but it's easy to be fooled into thinking it's faster than it is if you have asynchronous code in a task. Take this gulpfile for example:

Wait, the default task starts before the images task logs its message? Note we're also being told images only took 465 micro-seconds. There are three ways we can fix this.

One way is to return a reliable stream, but that doesn't apply here so we'll move on. Quick side note: if you are using a gulpfile.coffee like mentioned above, CoffeeScript's implicit return (i.e. the last line of every function becomes a return statement when compiled) which could help tighten us task timings without you realising it.

One way to solve this is to use the task's callback argument like this:

Note, done can only be called once per task and it can also be called with an Error which will end the task appropriately. The output would now be something like the following:

3.07 seconds, that's more like it. Gulp also supports promises in tasks and that's the other way we can solve it;

Note: calling reject anywhere in the task with an Error would be just like calling the done callback with one.

Don't group task dependencies by purpose, even though that might make most sense initially. Gulp uses Orchestrator underneath, which is described as "a module for sequencing and executing tasks and dependencies in maximum concurrency." Dependencies are ran in parallel, as much as your dependency graph permits. So, what you really should do is try to flatten that graph as much as possible.

If you had these tasks for example:

So yeah, remove any tasks there for decoration and flatten the dependency graph as much as possible.

Ok, that heading is pure sensationalism. If you don't know Yeoman is, it's a tool for scaffolding or bootstrapping projects. So someone creates a "generator" which when ran might ask you a few questions (like "Would you like to use JavaScript or CoffeeScript?") and then spit out a skeleton project for you. There are thousands of Yeoman generators out there for all sorts of apps, take a look.

Let's say you create a lot of similar projects or even directories within a project and you'd like to have a template for that so you can quickly generate it as you go. Well, you could learn the Yeoman API but everything Yeoman does is already doable with Gulp, so why not just use Gulp plugins? You can easily copy files, prompt the user, and so on. Well that's what Slush is; "The streaming scaffolding system. Gulp as a replacement for Yeoman."

This just copies all files in the generator's directory to the user's current directory. Notice that you need to use __dirname when pointing to files within the generator.

There are very few Slush generators in comparison to Yeoman, so if you're looking for a Slush generator, then maybe stick to Yeoman (for now), but if you're writing one, I'd suggest using Slush. Why not kill two birds with the one API?

If you're still using Grunt (poor you!) then the gulp-grunt gulp plugin can help you transition bit by bit to Gulp. This plugin allows you to run your Grunt tasks from Gulp and even have your Gulp tasks depend on Grunt tasks. If you want to know, gulp-grunt's comprehensive readme has you covered.