How do you manage your third-party assets? With my simple setup, all I have to do is run one command and reload the page.

Lets take a look at managing our third-party dependencies with Bower and preprocessing them with Gulp & main-bower-files. This post is intended for existing Bower users as well as anyone who hasn’t even heard of it.

Bower is an unopinionated package manager for the web. John Lindquist (from egghead.io) was nice enough to record a quick overview; 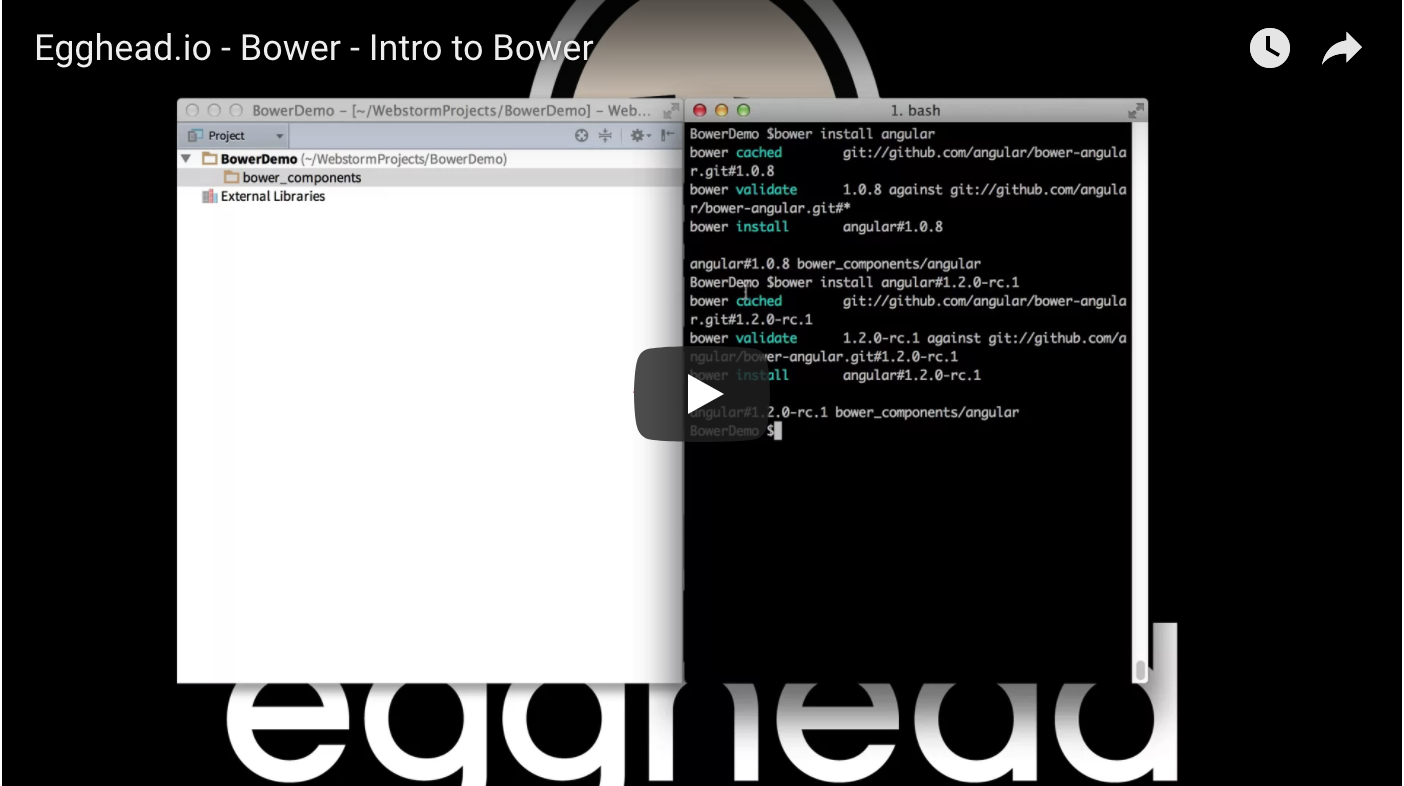 That’s it! As is often said:

Bower is just a package manager.

Bower depends on Node.js and npm (which comes bundled with Node.js).

Make sure that git is installed as some Bower packages require it to be fetched and installed. Side note: another great thing about Bower is that you can install anything from GitHub (or even Gist), even if it doesn’t support Bower (i.e. does not have a bower.json); anything with a public git URL can be installed.

Let’s dig into an example. Here’s how a basic project using Bower might be structured:

Let's assume we already have these files and have ran bower init to generate a bower.json.

So, if we were to run bower install bootstrap --save, Bootstrap would be installed under bower_components/bootstrap. The --save argument saves Bootstrap to our bower.json (see the dependencies property).

Notice that jquery is installed here as well because it is a dependency of bootstrap itself (as set in its own bower.json).

Note: if you're used to npm, notice here that Bower uses a flat dependency tree.

Here we link to the files we need. How do we know which are needed? Well, a package's bower.json (typically) has a main property which lists them.

Note: if you're used to npm, notice here that a package can have a main file which isn't JavaScript and can have more than one main file.

What if we want to add / remove a dependency? What if we update a dependency and the new version has different main files? Or the updated package's own dependencies have changed? Answer: we'll have to figure it all out again and update index.html. The main property supports wildcards, which only makes it more awkward.

This one is easy. Bower supports additional configuration via an optional .bowerrc JSON file. We'll add that, with the following content to tell Bower where to install our dependencies:

Now, how will Bower solve the rest of our problems? Well, actually, it won't.

Bower is just a package manager.

That's where Gulp comes in; a Node.js-based streaming build system. It's simple, intuitive and really fast. I won't go into too much detail on how Gulp works here as it's not needed, but if you're interested, see Building With Gulp.

If you're unfamiliar with npm, know that it is Node.js' package manager which Bower took some inspiration from;

To get set up, we need to run the following:

This will generate a package.json for us, install Gulp globally and locally, along with a couple of handy Gulp plugins and main-bower-files, a "Gulp-friendly" Node.js module

Note: --save-dev is just like --save except the dependency is saved under the devDependencies property, instead of the dependencies. This is supported by both npm & Bower.

We need a new gulpfile.js file at the root which will generate two single files, third-party.js and third-party.css;

You're probably ahead of me, but what's happening here is:

If you're not thinking this is an ideal setup yet, keep reading. We've solved all of our problems from earlier:

We could quickly change our dependencies and simply reload without having to touch our HTML. For example:

What if you wanted to explicitly set the main file(s) for a dependency? See the main-bower-files readme on overriding the main property.

With this setup, all our dependencies will be created as globals. I've deliberately avoided talking about AMD, CommonJS and shimming to keep this as simple as possible.

Since our dependencies are combined into one file, it's harder to debug. It would be even worse if we had minified them. Source maps were created for this reason. If we generated source maps, then our browser could parse the source map automatically and make it appear as though you're running unminified and uncombined files, without impacting performance. See the gulp-concat readme on how to generate source maps.

Now thanks to Bower, Gulp and main-bower-files, we have a hassle-free dependency setup. All we have to do is to run gulp and reload the page after installing a new dependency. Have a look at the example project on GitHub for you to play around with.

It could be simplified even more, for example:

But I'll leave that up to you 😃