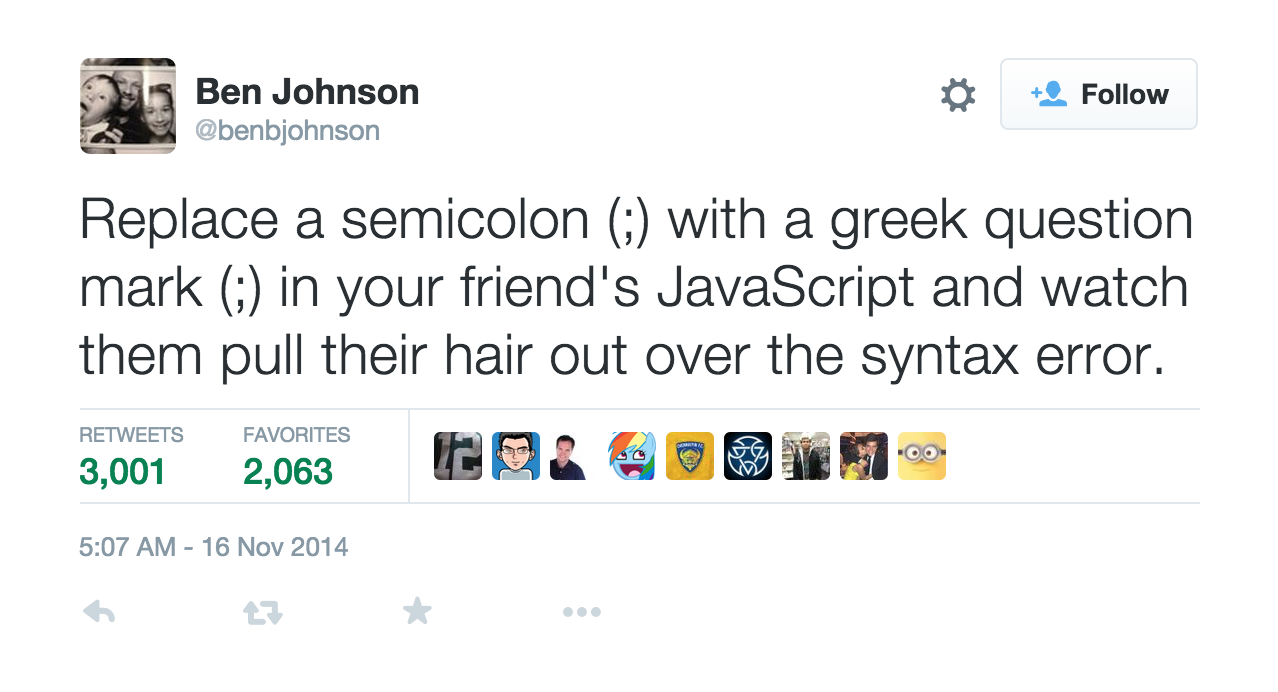 You might have seen Ben Johnson’s tweet. I’m sorry everyone, I’ve made a module which makes this a lot easier to do. It’s called Olc. “Olc” is the Irish word for “bad” and is inconspicious enough to go unnoticed if added to a project on the sly.

That's the simplest way to run Olc on some files (with Gulp). Yay, syntax errors. See the readme for standalone usage if you'd prefer not to use Gulp.

Alternatively, you can could pass a charactersToReplace option (as a string or array of characters) to explicitly choose how you'd like to inflict the pain.

Olc handles what should be replaced with what and leaves the real work to gulp-replace underneath. The most interesting thing was testing this. I like having comprehensive tests for my modules. I like hooking them up to Travis-CI (Linux) and Appveyor (Windows) to run the tests on every commit (via GitHub webhook). But how could this be tested?

Testing the greek mode is simple as you just need to check the output against a file containing the expected contents, but how can you test the one mode? How can you check that a random character of a set is replaced throughout? Keep in mind that each occurrence would be replaced with one of the character's homoglyphs chosen at random. That sounds like a lot of hassle.

Set theory was the answer. Treating each character as a unique element of a set simplifies everything. Each of the following must be confirmed:

Let's take this code (which contains all possible target characters) as example contents of a file:

Let's assume that all semi-colons were replaced and all of its homoglyphs were used. Here's a Venn diagram:

All instances of only one character were replaced

The replaced character was a supported target character

That's easy. We just need to check if the only element (;) in the difference is one we support.

Every character added must be a homoglyph of the replaced character

So, now we need to know which characters were added. That's the difference of the new set and the original set, i.e. everything on the right-hand side of the diagram. Once every one of those elements is a homoglyth of the target character, then we've covered everything, so the tests pass.

The [simplesets](https://github.com/PeterScott/simplesets-nodejs) module made light work of the set stuff and I also used mocha, should, and a few other modules for plumbing to implement the tests. Check out Olc on GitHub, feel free to submit a pull-request, or use Olc on someone you know but make sure to blame Ben Johnson.